Here's an additional collection of quotes from Pluto, Former Ninth Planet, some inspirational, and some just plain comical. Some of these appear in The Pluto Diaries: Confessions of a Former Ninth Planet, tidbits of Pluto's hard-earned wisdom since his demotion to "dwarf planet" nearly eleven years ago.

Pluto on losing his Planet Club membership and becoming a dwarf planet:

1. "No, a rose by any other name would NOT smell as sweet...I want my planet title back."

2. "I thought "dwarf planet" was a type of planet, but then it Dawned on me like a spacecraft hovering over Ceres..."

3. "Dwarf planet? THE STARGAZERS might just as well have called me a Pla-NOT."

Pluto on being different:

4. "Eccentric is just a polite way of saying "weird."

Pluto on why astronomers were so desperate to change the definition of "planet" :

5. "Now THEY were in panic mode, convinced that all of Science would go up in a cloud of smoke, taking Reason and Logic along with it, if THEY did not step in and do something about the problem."

6. "Once in a blue moon, something flies past your doorstep at 31,000 miles per hour and changes everything."

7. "When THE STARGAZERS gather information about one member of a cosmic system, it gives them insight into the other members of the system. That's what happened when James Christy discovered my brother Charon; they end up finding out a lot more about me too. It's not that surprising when you think about it. The thing about family is, like it or not, you're all connected in ways that can never be broken. Despite your differences, you all share the same origin and are made out of the same basic stuff; it's just combined in different ways and affected by different experiences. And, being in close quarters, you rub off on each other, taking on similar features as time goes by. Whether it's red gunk leaking out of one brother's escaping atmosphere onto another's polar cap, or oxygen and water plumes from one sibling's surface traveling into another's atmosphere." 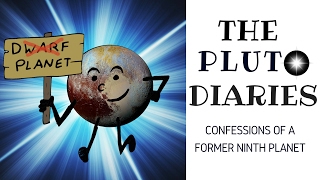